Ever heard of Pinterest Fails?  This project was definitely like that, except I never had a Pin I was going from so it was mostly trial and error.

I started out with a frame from Big Lots I picked up for $20.  The exterior was a 16 x 20 with a mat board that left 8 x 10 for a photo of the couple I planned to use.  The mat board looked sort of like a pale burlap so I thought that was perfect for the Pottery Barn knock off I wanted to create.

I picked up 3 sheets of T-Shirt Transfer Paper for $4 with a 50% off coupon.  I then went to work creating my masterpiece.  I had to ensure my words lined up with the area on the mat.  Since my printer only prints up to 8x10, I did 3 sheets (one for top/one for bottom/one for both sides).  For the top and bottom, I had 16" x 3" of space to work with.  On the sides I had 4" x 10".  I used MS Publisher to create text boxes to the size I had to work with and set off trying to figure out the font sizes I would need to fill up all the text boxes evenly.  In the end, I used size 24 in Felix Titling and 36 in Palace Script for a few accent words (these were the same fonts I used on the couple's wedding invitations so I found it fitting).

Error 1: Trying to print mirror image.  Apparently in Publisher you cannot print mirror image which is a requirement for this project to work out when you do the transfer.  After searching the web to find a solution, I finally found one that advised me to "copy" my text box and "paste special" as a JPEG.  I could then flip the image horizontally to get it where I needed for printing purposes.

I continued on my quest and printed out the 3 sheets of paper.  I followed the instructions on the transfer using a pillowcase to cover my project and an iron turned all the way high with no steam.
Initially, I had success!

Error 2:  If your image is peeling up a bit after you've removed the backing, DO NOT go back and iron it again.  I did this, and when I tried to lift it up again, the pillowcase was stuck to the words and ripped them off entirely (see photo below). 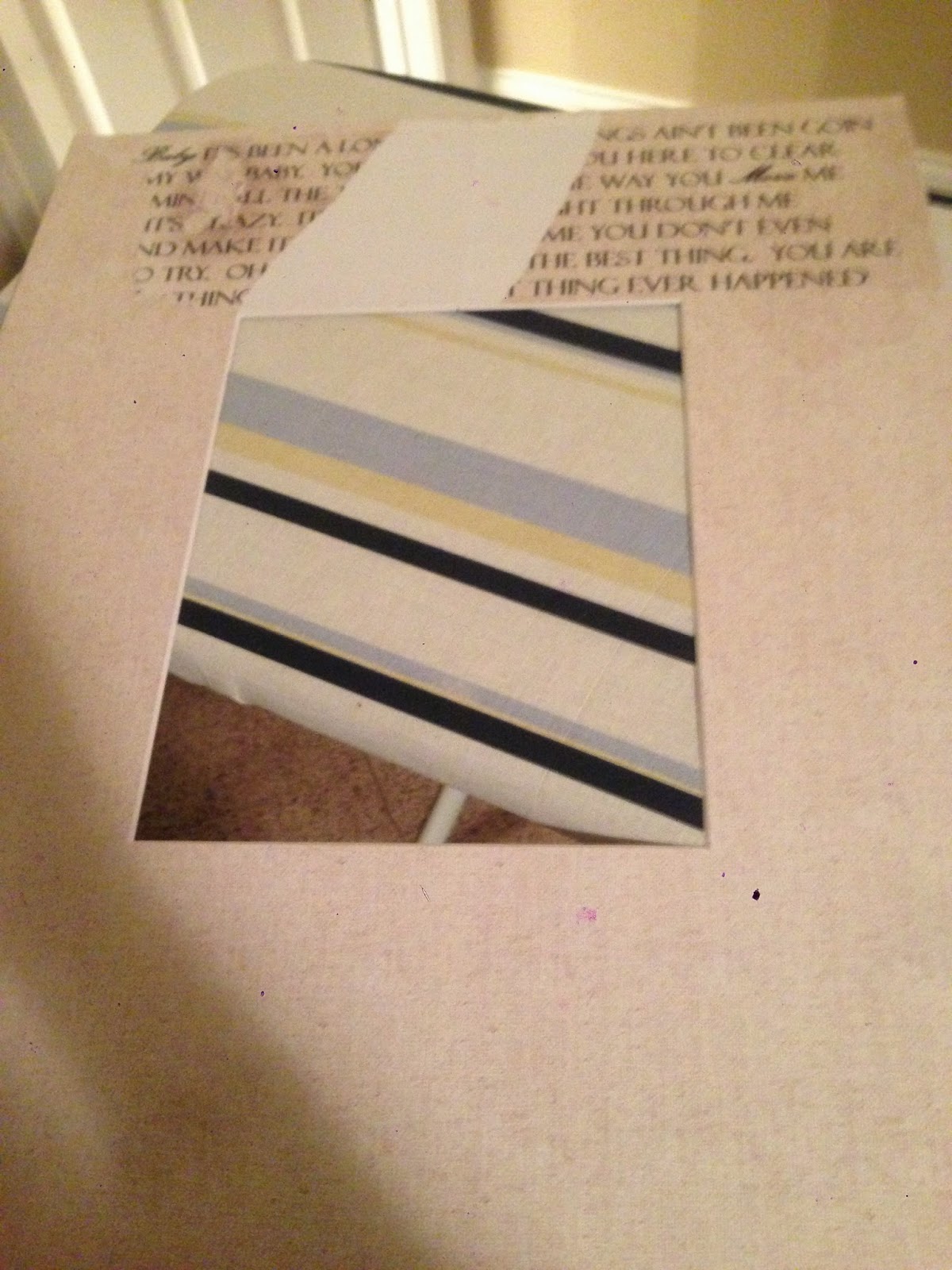 So with my project essentially destroyed, I was back to the drawing board.

Error 3: I decided to try to salvage it by putting some fabric over the ruined board.  I picked up some thin insulating fabric from Hobby Lobby and used Modge Podge to apply it over the board, cutting it using this tutorial.  Not only did I end up with wet spots from the glue, but also could see the remainder of the words through the fabric.  Ugh.  Photo not included for obvious reasons.

Back to the drawing board yet again!  I had some leftover burlap from an old project so I used a stapler to staple the burlap tightly over the mat and then cut out the inside and stapled again.  So far, so good.  I then used the remaining T-Shirt Transfer Prints and started out with the bottom.  All good, until I pulled off the bottom right section and realized it was at an angle.  FML.  Seriously.

Error 4: Not making sure the paper stayed in the same spot under the pillowcase before I began ironing. '
I just about gave up at this point, and did give up on the transfer but decided to go with my original idea which was putting words on the photo itself around the couple (I'd seen something similar here). Once I opened up the photo, I realized my next error.

Error 5: Failing to verify photo orientation BEFORE I began the project.  Even if ALL the other steps had worked properly, when I went back to my computer I realized the photo I had was a landscape orientation, and the way I was transferring was for a portrait.

I should have given up at this point, I really should have.  But I had to get this done for Christmas so this was my LAST attempt.  I used Photoshop to once again space my words into the area of the photo.  This time it was a little more tricky because I had mixed spaces and not fixed areas to work with.  In the end, since they didn't have the same fonts I wanted, I used Book Antiqua Bold in 28 pt and Kuntzler Script in 42 pt. 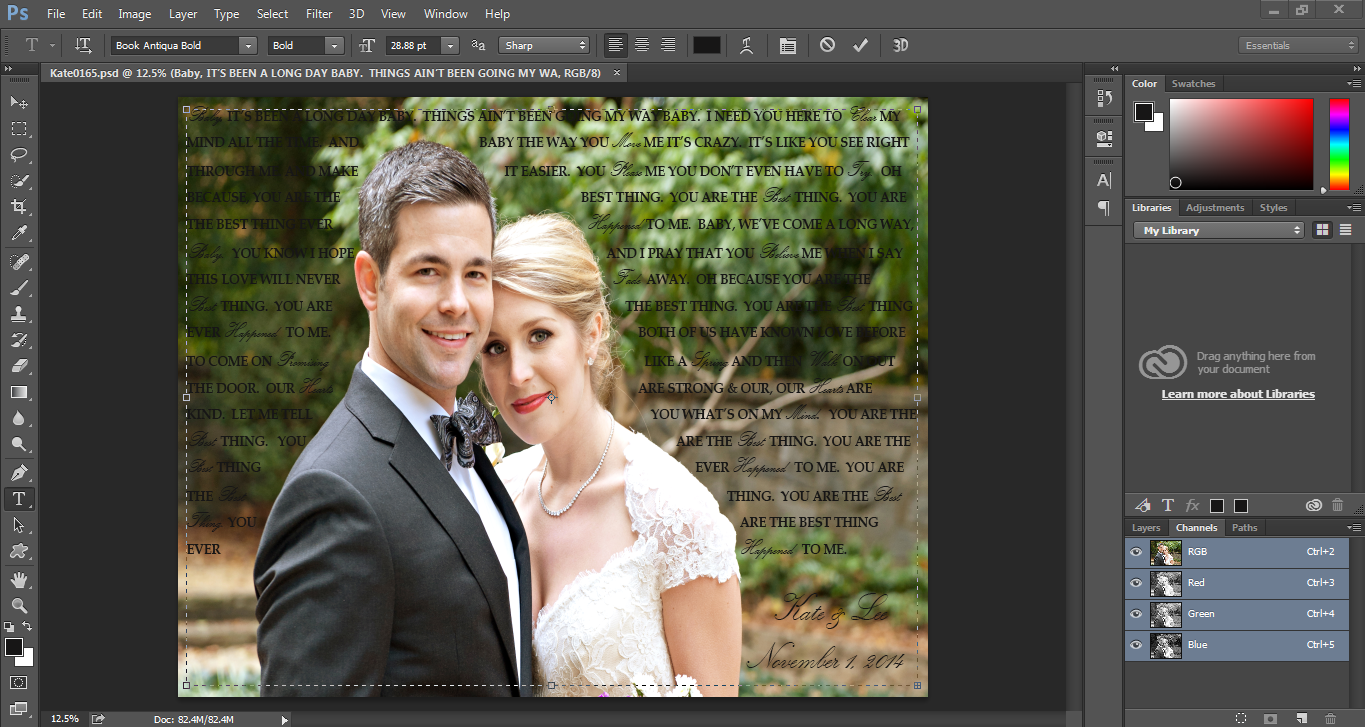 With everything completed, I went to go have my image printed at CVS.

Error 6: Not ensuring my original photo was the right aspect ratio for my frame.  I went to check out on a 16" x 20" photo and realized my original was 4" x 6".  Read: does not go equally into my frame  The closest was a 16" x 18" but it would have taken everyone I looked at at least 2 weeks to mail (except Fedex which wanted $89, no thanks). 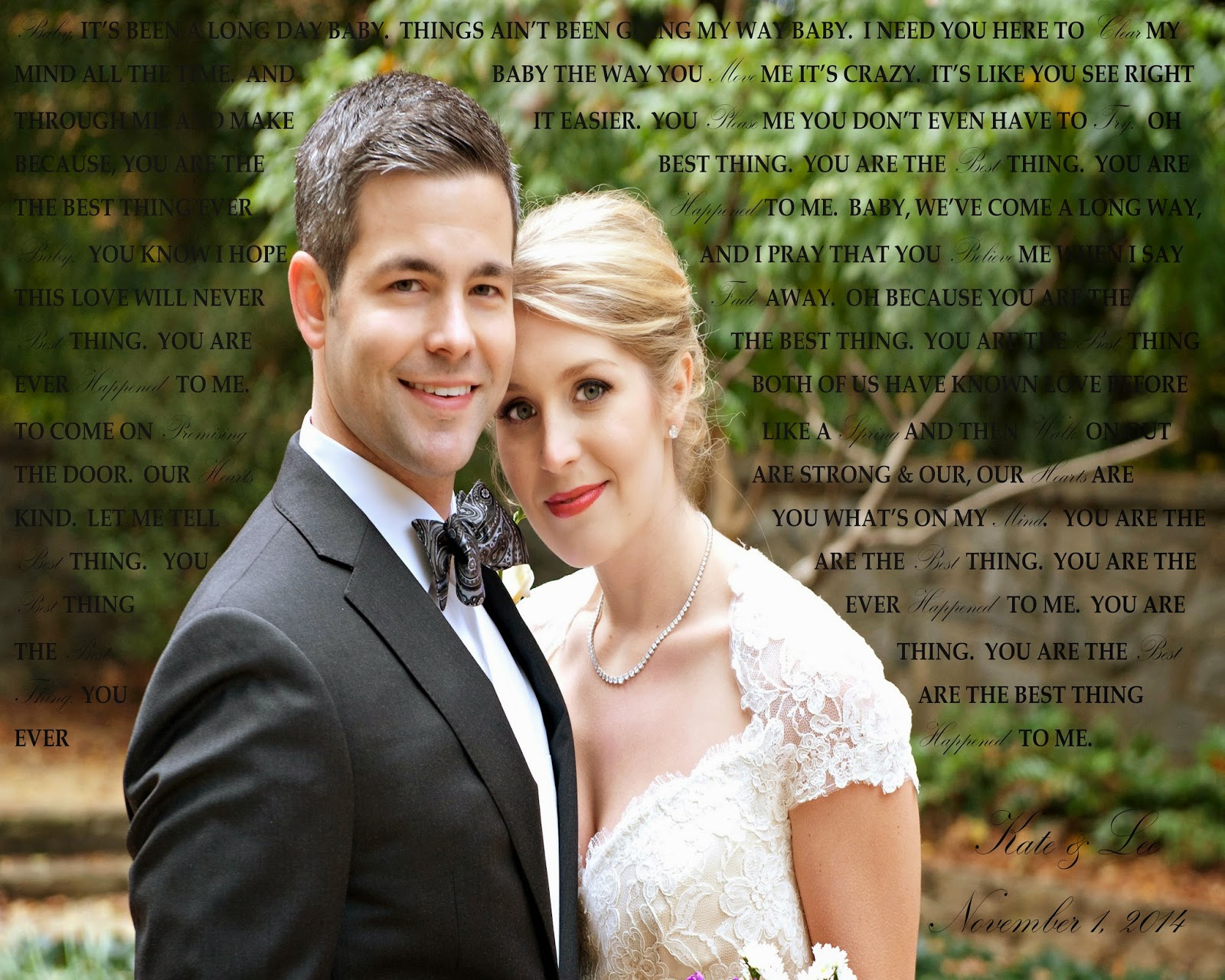 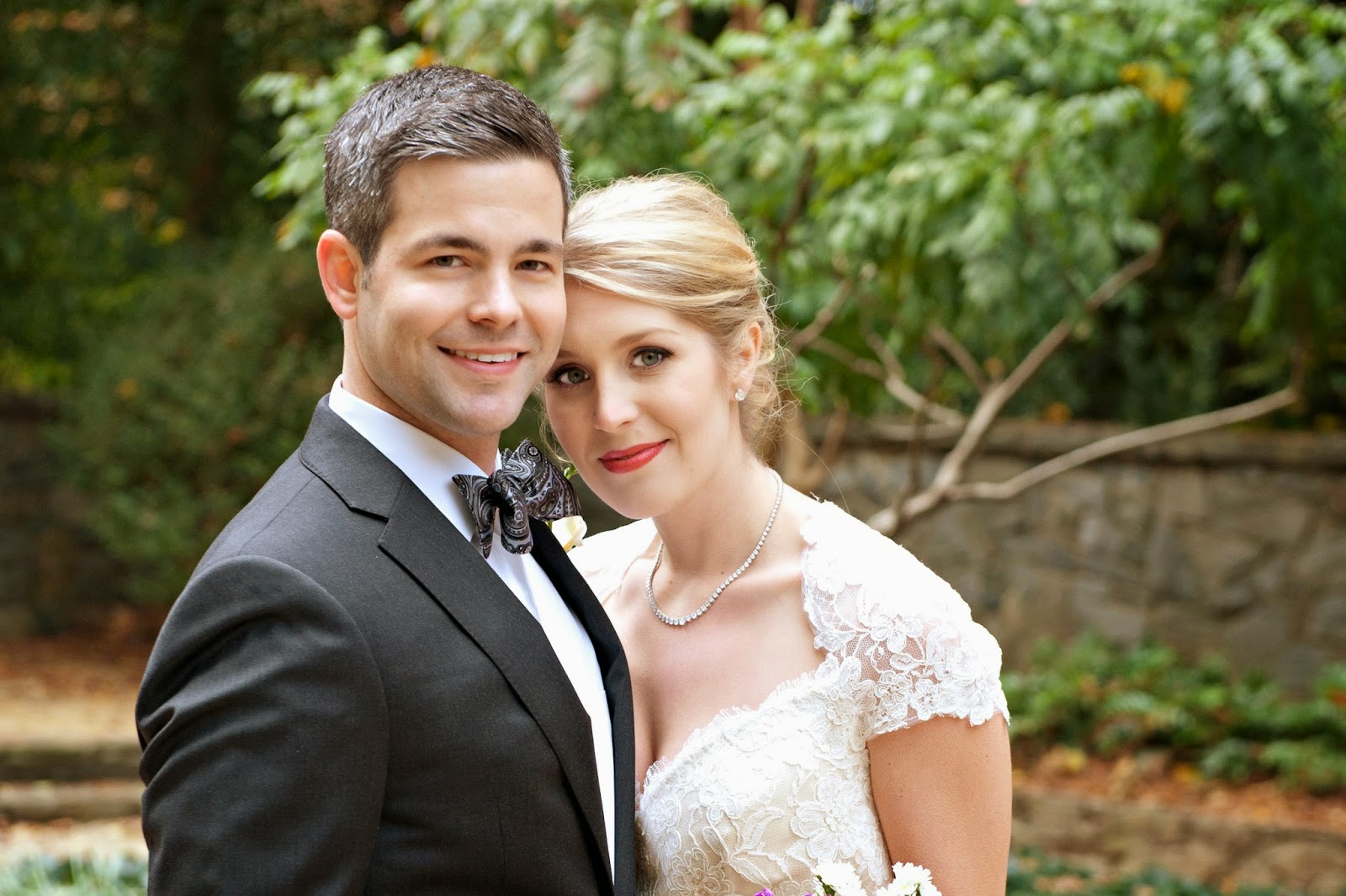 So finally, I got the photo uploaded to Walgreens (they had a better deal on 16" x 20" enlargements) and picked it up a few hours later.  Perfection! 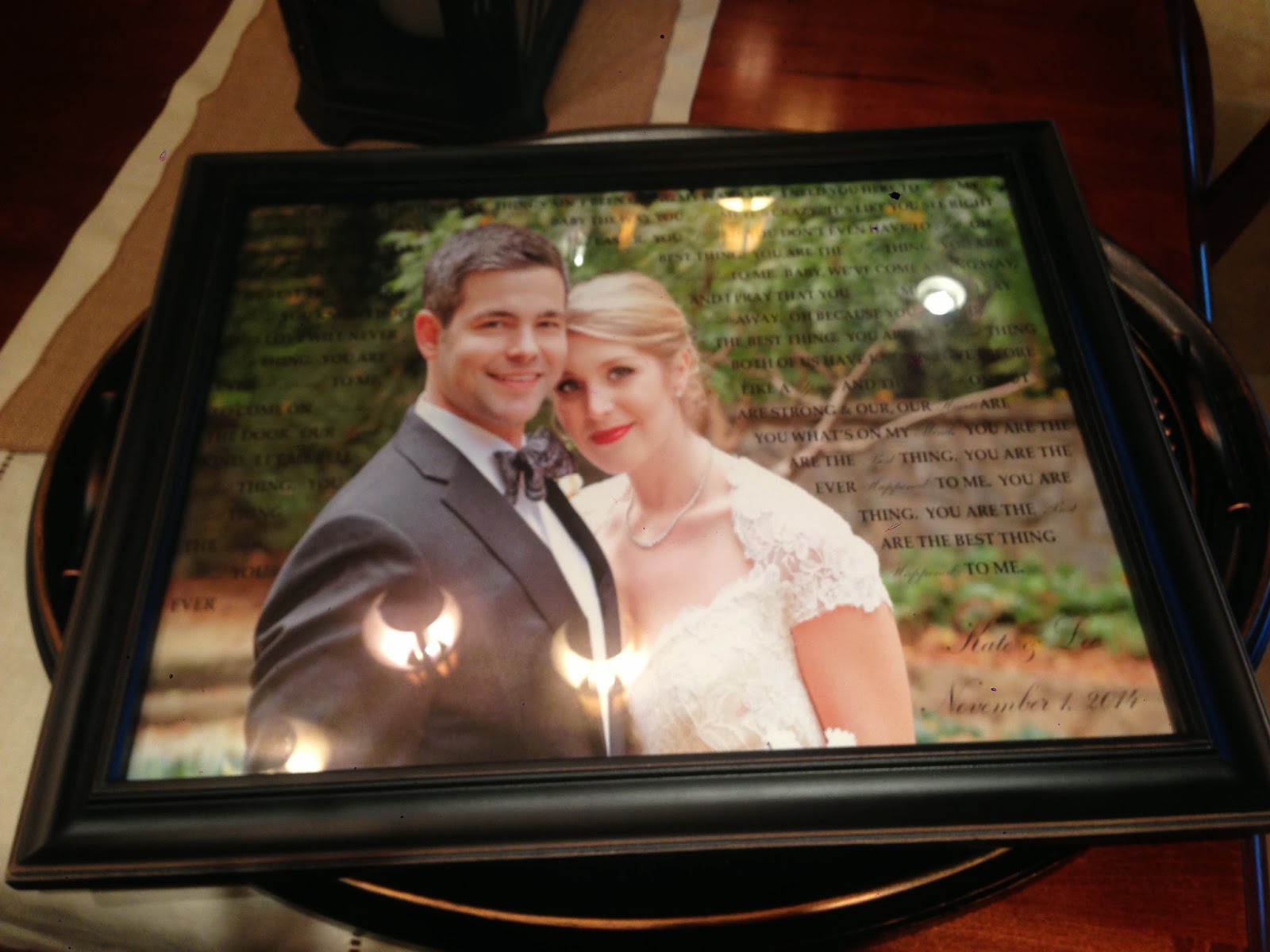 In the end, I spent $30 on this project, so not bad for a homemade beautiful (after a couple tries) gift when the PB version was $40 for the frame only!
Posted by Unknown at 7:23 AM